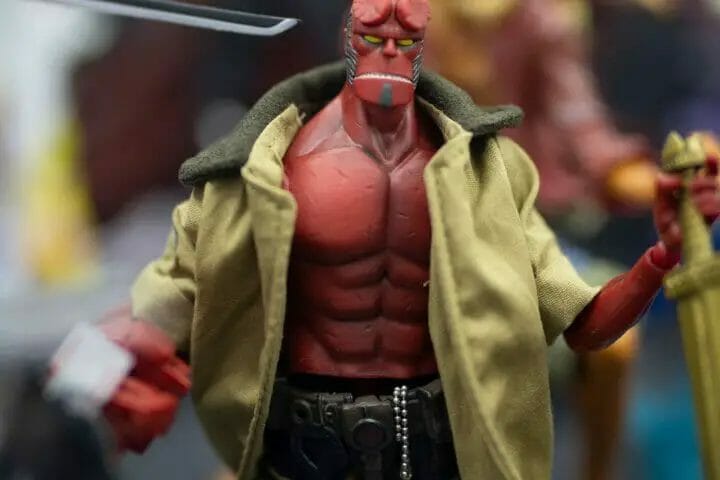 Why are action figures so expensive these days? If you are wondering what has happened to make this industry so expensive, we will share ten reasons for the same below.

Action figures are doll-like toys that usually consist of plastic and resemble characters of movies, comic books, or T.V. programs related to action hero universes such as Marvel’s Avengers and D.C.’s X-Men franchise.

Action figures come equipped with various accessories like weapons, clothes, and vehicles. These action figures are appealing due to their bright colors and brand recognition from their respective movie/cartoon franchises, which children watch on the T.V. or in theatres.

They are an excellent play value for your kids. Children especially develop an emotional attachment with action figures in their homes. Even adults are a fan of them and collect the action figures to décor their home.

If you are new to the world of action figures, you will find them more expensive than other toys of similar size, shape, and functionalities.

You may wonder: why are action figures so expensive? If I tell you it’s just because of their cost of manufacturing, then that will not answer your question.

Let us dive deep into this topic and list the various reasons why the price of action figures is soaring higher in the market than ever before.

Top Seven Reasons Which Has Made Action Figures Expensive Today

You may say that the action figures consist of plastic, so why is the price so high? There are various raw materials used in the production of action figures like oil and plastic, whose cost has increased significantly in the last ten years.

But let me tell you that while manufacturing the action figures, steel molds and paper are also used for packaging. The cost of steel and paper is also increasing year in and year out.

So, in short, every aspect of the price of raw material is increasing. So, this has made the action figures more expensive today.

China was an excellent place for manufacturing U.S. toy action figures because its labor cost is much lower than the United States. But recently, there have been labor issues in China.

It has increased the cost of manual labor. The increase in labor cost has forced some companies to shift their manufacturing from China to other countries. For instance, Transformers Bot Shots toys are now being manufactured in Vietnam.

You might also like to read : Can Lamaze Toys Be Washed? Best Ways To Wash Lamaze Toys In 2021

Oil prices are increasing day by day. The cost of the oil greatly affects the price of the Action figures. For instance, you need to move the toys from factory to port, port to warehouse, and warehouse to distribution centers.

So it’s a long chain, and you need oil in vehicles when moving from one place to another. But as the price of oil is increasing, it has affected the price of Action figures.

The safety testing of Action figures has now become mandatory. But there is not one safety test in the whole world. Every country has set up its safety standards.

The additional cost of safety testing has greatly affected the price of Action figures, which has finally made its price rise high in the market.

However, some companies use polymethyl methacrylate in making Action figures. But they are brittle and not as strong as a thermoplastic material. They are less expensive.

If any action figure is available in the market, but it’s old and limited, then even if its quality is not that good, the price goes up.

#7. Rule Of Supply And Demand

You might also like to read : Why Do Toys Turn On By Themselves? Are Only Weak Batteries To Blame?

Sometimes the price of action figures goes high just because it looks cool and awesome.

The action figures are mainly made for kids. But nowadays, most kids are interested in gadgets and video games.

So, fewer kids are interested in playing with action figures, which became an advantage for the sellers. They started targeting adults who had jobs and willingness to pay more money for the action figures.

The price of action figures depends on the marketing strategy of the company. A good marketing team in a toy company puts a lot of effort into making advertisements.

They hire people to shoot photos and edit them. They also need to pay money to place the advertisements on social media and various websites so that you can know the existence of such extraordinary action figures.

Again, if the company wishes to advertise internationally, it has to spend more money. So these factors indirectly affect the price of the action figures, and finally, their price soars high.

#1. What is the most expensive action figure in the world?

The L’oiseleur doll is one of the most costly action figures in the world, which will cost you $6.25 million. The doll plays the flute and has a pair of singing birds. It has one sword on one side. You can operate it by gears, and it is made with 2,340 components.

#2. How much is the average action figure?

#3. Are action figures worth collecting?

Collecting action figures can make you feel like a kid. Even if you keep them carefully and resell them in the future, you will have much profit.

I have outlined ten reasons why the price of action figures is rising so fast. Well, you can collect them and sell them in the future! They might even be a great investment. But you need to keep it in good condition for many years.

I hope you liked this article and please don’t forget to share suggestions for this article.